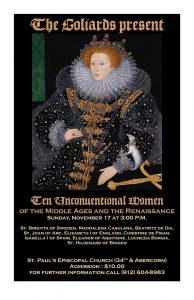 The performance will focus on ten women who lived from 1098-1603, whose influence in a phallocratic world was far greater than would normally be expected. Some were musicians and poets: St. Birgitta, St. Hildegard, Maddalena Casulana, Beatritz de Dia, and Christine de Pizan. Others wielded political power and were the inspiration for musical creation: Elizabeth I of England, Eleanor of Aquitaine, Isabella of Spain and Lucrezia Borgia. One (St. Joan of Arc) led her army to Orléans, where she defeated the besieging English and reversed, some might say however temporarily, the course of the Hundred Years’ War.

The Goliards will present a rich tapestry of music from this 400 year span, sung in Latin, Occitan (Provençal), Old French, Middle English, Spanish and Italian, with accompaniments by players of replicas of period instruments.

The Goliards, now in their 21st year (14th in Savannah) have specialized in the pre-1400 European repertory since their founding, and have now expanded their range to include (occasionally) works from the Renaissance.