Please enjoy this video of Anne playing the Bach B Minor Mass on an AMD French Single Harpsichord with the Wesley Monumental Choir and orchestra, 2018. 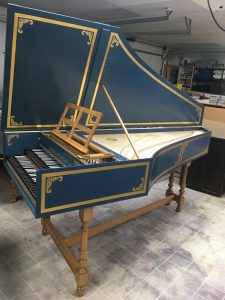 Featuring John Hillenbrand, vielle; Marcy Brenner, tenor viol; Cuffy Sullivan and Sheila Berg, vocals; and myself on organ, harpsichord and sinfonye. Sunday, November 17, at 3:00 P.M. St. Paul’s Episcopal Church (34th & Abercorn) admission $10.00. For further information, please call (912) 604-8983. The performance will focus on ten women who lived from 1098-1603, whose influence in a phallocratic world was far greater than would normally be expected. Some were musicians and poets: St. Birgitta, St. Hildegard, Maddalena Casulana, Beatritz de Dia, and Christine de Pizan. Others wielded political power and were the inspiration for musical creation: Elizabeth I of England, Eleanor of Aquitaine, Isabella of Spain and Lucrezia Borgia. One (St. Joan of Arc) led her army to Orléans, where she defeated the besieging English and reversed, some might say however temporarily, the course of the Hundred Years’ War. The Goliards will present a rich tapestry of music from this 400 year span, sung in Latin, Occitan (Provençal), Old French, Middle English, Spanish and Italian, with accompaniments by players of replicas of period instruments. The Goliards, now in their 21st year (14th in Savannah) have specialized in the pre-1400 European repertory since their founding, and have now expanded their […]

What a terrific meeting of music, minds, ideas and instruments as always at a Westfield Center meeting! I had the privilege of organizing and chairing a panel titled: Builder/Restorer/Technician and Performer/Player Roundtable. So thrilled to have a notable panel to set to discussions about the present state and future hopes and issues related to continuing progress with historic keyboards, replicas, and performers. A major concern discussed is how to pass on knowledge regarding care and maintenance as many of the groundbreaking builders are aging. With Stephen Birkett, David Breitman, Robert Murphy, John Phillips and Allan Winkler.

I had the great pleasure of being invited to attend a marvelous two day conference at Mount Vernon where the replica of the harpsichord George Washington bought for his niece Nellie Custis made by John Watson. Presentations and concerts discussed the people, times and music from the world of George and Martha Washington and Nellie Custis and her family. 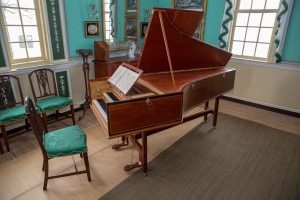 As part of the Boston Early Music Festival Exhibition, Anne rented the Charles Shubert ballroom at the Courtyard Marriot Downtown Boston with the dream of turning it into a unique display and performance space for keyboards, builders, and players. She included builders Doug Maple (clavichords), A. David Moore (organs), and Robert Hicks, as well as two early keyboard organizations, The Westfield Center for Historic Keyboard Studies and The Historical Keyboard Society of North America. The center of the room was set up for concerts which occurred daily. It turned out to be an amazing salon that went on all day every day of the exhibition! It was also the debut of the Hood/Acker replica of an 1816 Nannette Streicher piano.

On October 14, 2018, Anne brought along one of the harpsichords she made and joined colleagues Marcy Brenner on viola da gamba, Ann Cafferty on baroque violin, and Jeana Melilli on baroque flute in a program of baroque trios and quartets by Telemann, Albinoni, Couperin, and Purcell playing in the prestigious Savannah Philharmonic Larsen Spotlight Chamber Music Series in downtown Savannah.

I am honored to have been chosen to play continuo for a performance of the incredible Bach B minor Mass, directed by Dr. Monica Harper Deckle.