Published in The Piano Technicians Journal (vol. 65, no. 2, Feb. 2022, pp 15-18):  The first half of an article I wrote about my journey in completing a replica of an 1816 fortepiano by the famed piano builder Nannette Streicher that was begun by a mentor and friend, Margaret Hood, but who sadly passed away too young before its completion.  Interestingly, the veneer of Cuban mahogany comes from a log, gifted to me by a Miami sculptor in my days there, that  I sent to Margaret and that she sawed herself for the veneer.  Now it has come back to me.  The instrument debuted at the Boston Early Music Festival in 2019 and is now part of my personal collection.

Anne was pleased to consult and be mentioned by notable writer Patricia Morrisroe in her November 6, 2020 New York times article about Nannette Streicher and her pianos.  You can even find a photo of the replica Nannette Streicher piano from 1816 begun by Margaret Hood and completed by Anne.

Please enjoy this video of Anne playing the Bach B Minor Mass on an AMD French Single Harpsichord with the Wesley Monumental Choir and orchestra, 2018. 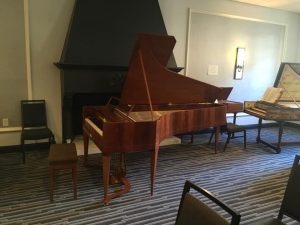 I had the pleasure and duty to take on the completion of Margaret Hood’s unfinished last piano.  After all, it is a design by a woman, Nannette Streicher, daughter of the famous piano Viennese maker Andreas Stein, the replica was begun by a woman, so, as I told Margaret’s husband after her too early passing, a woman needs to finish it.  I had it playing for its debut at the 2019 Boston Early Music Festival, but have continued to refine it’s workings, and plan to restring it this coming summer with Stephen Birkett’s Historic Music Wire and releather it with historically made leather from Jason Leininger.  then look out!  I’m practicing my Schubert!

As part of the Boston Early Music Festival Exhibition, Anne rented the Charles Shubert ballroom at the Courtyard Marriot Downtown Boston with the dream of turning it into a unique display and performance space for keyboards, builders, and players. She included builders Doug Maple (clavichords), A. David Moore (organs), and Robert Hicks, as well as two early keyboard organizations, The Westfield Center for Historic Keyboard Studies and The Historical Keyboard Society of North America. The center of the room was set up for concerts which occurred daily. It turned out to be an amazing salon that went on all day every day of the exhibition! It was also the debut of the Hood/Acker replica of an 1816 Nannette Streicher piano.

I’ve been very neglectful adding instruments I work on into this website.  I work on so many and would rather be in the workshop or on the road than updating my websites.

This is a beautiful Steinway square ca. 1864 restored for a private owner in Pennsylvania. Yes, the lid went on before it went home.  Original finish cleaned up.  Massively damaged legs restored using wire armature and wood epoxy and stain to resculpt and faux finish.  Sweet sounding instrument!

I had the great pleasure of exhibiting at the 2017 Boston Early Music Festival Exhibition with display of the beautiful instruments from the AMD line from Atelier Marc Ducornet along with two kits from The Paris Workshop and a clavichord of my own making.  Julien Bailly and Lucie Ducornet came from France to help at the booth. We had a wonderful time, saw so many old friends, made new friends, and sold some instruments and kits!

I attended Forte/Piano, a once in a lifetime gathering of the world’s many of the greatest lovers of the historical piano including performers, scholars, and builders. Words cannot express. It was an honor and a privilege.

I once again have the great pleasure of exhibiting for myself and The Paris Workshop at The Boston Early Music Festival Exhibition.

I will be showing kits as well as debuting the AMD Logo line of harpsichords from the Atelier Marc Ducornet.

Working in Seattle for several clients on 19th century pianos, including an 1875 Erard, an 1860 Pleyel and others.