This magnificent and historically important piano was ordered by Don Pedro Romero de Terreros from Collard & Collard, British piano makers, on July 24, 1851 as a gift for his niece, Doña Matilde Terreros de Garcia. Collard and Collard (run by the brothers William Frederick and Frederick William) was a descendant of the company established by Longman & Broderip in London in the second half of the 18th century. The Collards worked with Muzio Clementi (signing their instruments variously, including Clementi & Co in 1800 and Clementi, Collard & Collard in 1819) and took over sole responsibility after Clementi’s death in 1832. Collard & Collard, over time, distinguished itself for creating unique pianos for royalty and other powerful leaders during the 19th century. This excellent piece was specially constructed of the finest and most expensive woods and veneers of its day, including French walnut and burled Amboyna.

Very few of these special ordered pianos were constructed by Collard & Collard. Only two are known to have existed in Mexico, this one and another almost identical one (with small variations in the exterior brocade) which was ordered by French Emperor Napoleon Bonaparte III for his “cousin,” Mexican Emperor Maximillian of Austria and his wife, Empress Carlota. The later is currently on exhibit in the National Museum of History in Chapultepec Castle, Mexico.

This instrument enjoyed excellent care during most of its life. We restored it to excellent playing condition for the current owner, who is sadly downsizing and has asked us to find it a new good home. The restoration/conservation maintained the instrument’s originality as much as possible.

Incredibly, it comes with full provenance and multiple appraisals by Mexican antiquities and historic piano specialists. 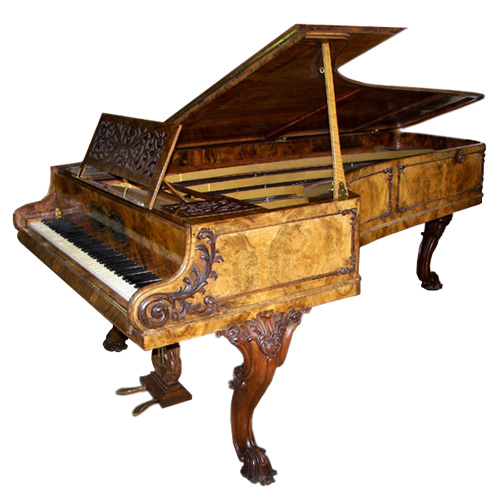 Click thumbnails below for more views of this instrument